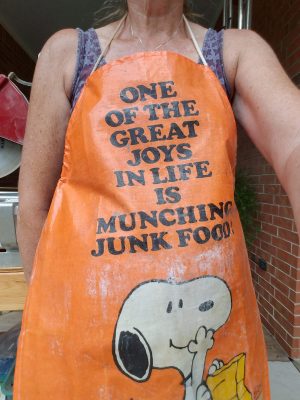 I was working with my wet belt sander and my tile saw a few days ago. When I do this wet and messy job, I wear a plastic apron that was gifted to me in 1979. Yes it is old. Yes, it should probably be retired. But I cannot do it.

When I graduated from high school I was 17. I landed a good job working as an executive secretary at ITT in New York. I worked there for five years while going to college at night. My five years at ITT were filled with so much learning and many wonderful people. Two men in particular will always hold a special place in my heart, my very first boss at ITT, Morris Gardner, and a later boss William Patton. Bill Patton touched my life in ways that have had a lasting impact.

Back in the late 1970’s, secretaries still served coffee to visiting executives. In my first week working for Mr. Patton he saw how nervous I was about spilling coffee. He called me into his office and demonstrated how to carry the cup from the top with a claw grip so it would be less likely to spill. He was an avid photographer and when I told him that I was excited about a new SLR camera that I bought he came into the office the next week and gave me one of his old macro lenses that he “didn’t need any more.” When Intel came out with their new microchip technology he knew what an exciting thing that was. He called me into his office and told me all about this new microchip, what it would do and how it worked. He was an avid biker, often riding his motorcycle cross country. I remember thinking, wow, how cool is that. I am pretty sure he was close to 60 by then. He came to our wedding and took pictures all night. He had them all printed and gave them to me in a photo album. They are some of our most cherished pictures. He knew that I liked to cook and the first year we were married his Christmas gift to me was a cast iron pan, a chef’s hat, and an apron. Yes, the very apron that I wear when I do my cold working.

One of the things I loved most about this man was how his eyes would get wide behind his thick glasses and smile just before a mischievous grin would cross his lips followed by a great laugh. He had an enthusiasm for life and learning that he loved to share with those around him. Bill Patton had a kind spirit and didn’t take himself too seriously. He treated everyone with respect, young or old, secretary or VP.

I left ITT in 1981 to attend college full time and finish my computer systems degree. Mr. Patton and I exchanged Christmas cards every year. He always included a lovely nature picture that he had taken on one of his travels and we would update each other on what was going on in our lives. His was always one of the first Christmas cards of the season that would arrive in my mailbox. Sadly, one year I did not receive a card. I sent one anyway hoping maybe he just didn’t get around to it that year. But the following year when the card did not come, I knew it was not a good sign. A Google search confirmed that William R. Patton died at home September 1, 2011 at the age of 92. Part of his obituary said “Bill enjoyed–really enjoyed–a long and adventurous life.” I think that described him well.

Bill Patton was a man I greatly admired. He instilled a confidence in me and inspired me to think big. And so, his apron will remain in my workshop and I will think of him fondly every time I wear it.